A genealogical DNA test of my Y-chromosomes showed answers to where my paternal ancestors originated from. This resulted in a wonderful journey through history discovering my roots and the origin of my Suhr family.

A DNA-test opens up a whole new world for genealogists, the genes provide answers that no church books can. But it may well be a dead end if you're unlucky. In my case, I was lucky and got a great story about the origins of Bernt Suhr born in 1615. The records show nothing about his ancestry.

There are different levels of these tests and the most extensive one checks everything that can be found on the Y-DNA, it provides answers to the very last small twig on the great DNA family tree where the root is "Adam". In my case, I ended up on a twig named FGC22501 and from it goes a couple of small branches out to the leaf I am on called R-A7496. What is interesting here is that FGC22501 can be documented back to the year 200 AD in York, England, where an archaeological find of a man has DNA FGC22501. It shows that this man, who was a Roman gladiator, and I have a common ancestor some hundred years earlier, in all probability from the area around Luxembourg and the Moselle Valley. There are also many traces of Celts with several DNA-matches from the south of England. If you go a few steps further back in time, you end up in northwestern Italy / southeast France about 4500 years ago.

With other men that have done the same test and are in this group, you can see a connection on which branch each one is. 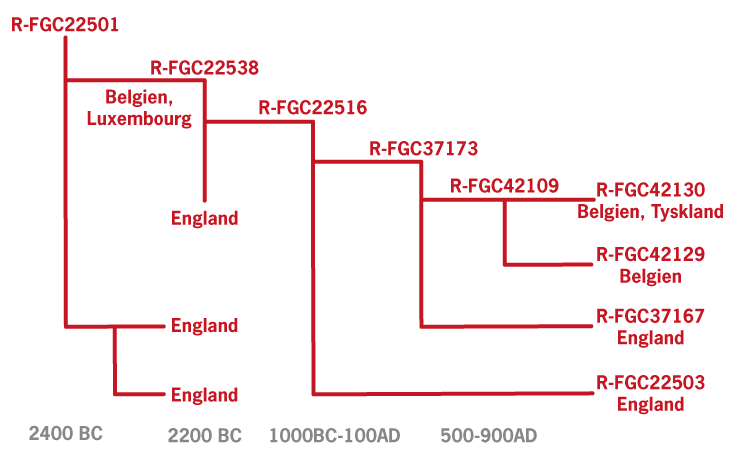 The diagram above shows how the last twigs of the DNA tree where I belong looks, my last twig called R-FGC42130 and its origins is in Belgium and Germany, the twig in under (R FGC42129) has a one in Belgium which have their ancestry documented to around the year 800 AD. This means that our branches are likely to merge with a common ancestor between 600 AD and 800 AD. What makes it more interesting and gives an historical insight is the common social classes that we have in common. We have people who worked closely with the rulers who for centuries controlled in these areas. What we know about my oldest known ancestor is that he got employed at the court of the Prince of Denmark Frederick1, when the Prince in 1635 became bishop of Bremen. Not just anyone may be considered for such a service but this suggests that Bernt Suhr belonged to a class and a guild that moved in those circles, and probably had a good reputation for being able to get this service. The Danish name for the service is "Hoffuerer" which translates to Butler. At this time, Butler was more an assistant or official who took care of some parts of the duties around the court. This type of profession was a guild that was inherited and here comes the interesting part, my immediate match in the DNA-tree, R-FGC42129, he also has the same origin in the same guild around the rulers in the region Belgium / Luxembourg. This name has been traced back to around the year 800 AD.

Other names that could be traced back gives clues to the Frankish kingdom that was divided to three sons in the West Francia, Middle Francia and East Francia kingdoms. This was later to become France and Germany and between them a corridor from Switzerland up to Bremen. Here in this corridor lived my ancestors and the area was subjected to many wars between the two other kingdoms. Here we have the house of Reginar2 in Mid Francia.

The name Suhr has its origin in the name Saur, Sour or Sauer which Bernt Suhr wrote it as when he came to Denmark, Suhr is written at the end of his life and his sons have since then used this spelling. The name is really the same, but with different spellings where Sauer is a Low German variant which has its linguistic region in today's north-western Germany and Holland. The name also provides a link to the area Luxembourg / Mosel valley. There is a river that runs as a border between Belgium and Luxembourg, which flows into the Mosel river, the river is called in German and Luxembourgish Sauer3 or Sûre in French.  We now have a connection with the DNA that indicates an origin in this area and the name that be related to the name of the river. 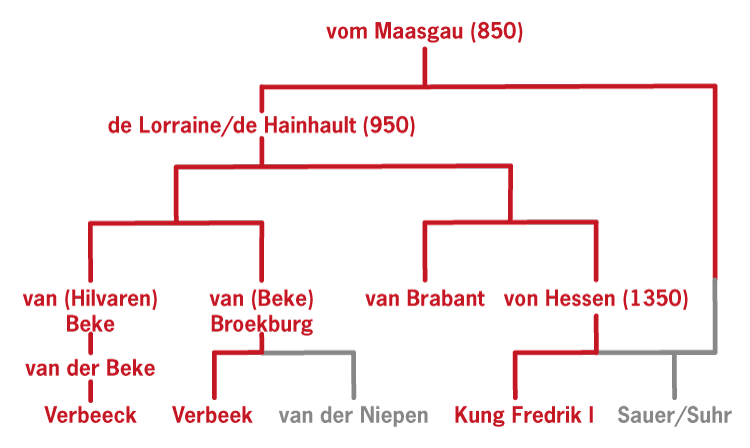 This DNA-tree shows my relation with some of the nearest branches. Suhr can here come from two branches, require DNA-samples from other men to more closely determine which branch I belong too. Either it comes directly from the vom Maasgau or via von Hessen, we have the Swedish king4 Frederick I of who is a member of the house von Hessen. Frederick was born in Kassel, Germany lying roughly between Bremen and the Moselle Valley, this give us a geographical connection as well.

Now remains the work to try to find where Bernt Suhr came from before Bremen and who his parents were.

A month after my BIG-Y DNA test was finished, there appeared a new name on the match list, a Danish man with a different last name. The DNA test shows that we still are quite closely related, our branches should have been connected some 400 years ago. He lives in the part of Denmark, where the family Suhr has been living more or less all the time. It remains for us to find his ancestry back in time, the oldest found so far was born around 1785 to 1790. Probably this is a descendant of one of Bernt Suhrs three other sons (other than the one I come from), or from Bernt's brother called Claus. One possibility is that it is an illegitimate son born sometime between 1660 and 1785. This is certainly an exciting lead that we later will have more answers on when this man will do the big test later this year.

We are also waiting for a response from another man who is a descendant of Bernt Suhr and 7th cousin to me, this is a sufficient distance to show some differences and then give a timeline, the comparison with the Danish man will be interesting too.

The map below shows how people moved and thereby spread their DNA over Europe, we also know how long time it takes for a new DNA-branch to emerge. In this way one can calculate back in time and obtain a historical perspective that tells when and where one's ancestors lived.

Now they take DNA-samples on archaeological findings and thanks to this we get time markers that provide answers to a certain time and that there were people in a place with a certain DNA group. In our case, we know that a Roman gladiator lived around the year 200 AD in the city of York and he had haplogroup FGC22501. Historically, we know that the Romans had a base in the city of Trier in the Moselle valley near Luxembourg, we also know that many others with the same haplogroup has an origin in this area. The haplogroup FGC22501 appeared about 2500 years ago as a new branch under U152 / L2 in the tree of our DNA. L2 has its roots in northern Switzerland and the next branch up is located in northern Italy.

Today there are a number of males that have this haplogroup and many of them are from the UK. They probably got there in stages as there are some differences in DNA that can be divided into two groups. The first group can be traced back to Roman times in the British Isles. The second phase occurred with William the Conqueror's foray into England in 1066, some of the soldiers had roots in northern Belgium.

The map shows how Charlemagne's Frankish kingdom 843 years were divided to his three sons. The pink part called West Franconia and there was Charles King, the Middle Franconia, the green area, had a son Lothar. In the east, had a son Louis's East Franconia which today is Germany. Middle Franconia soon became an area that the other two would like to have control over, and this resulted in many wars over the years also population movements.

From this time onwards, we know more about the ancestors that we in this group have. There will be more and more results from different people's DNA tests that provide more answers on how we are linked genetically and with that we get more knowledge about our origins. 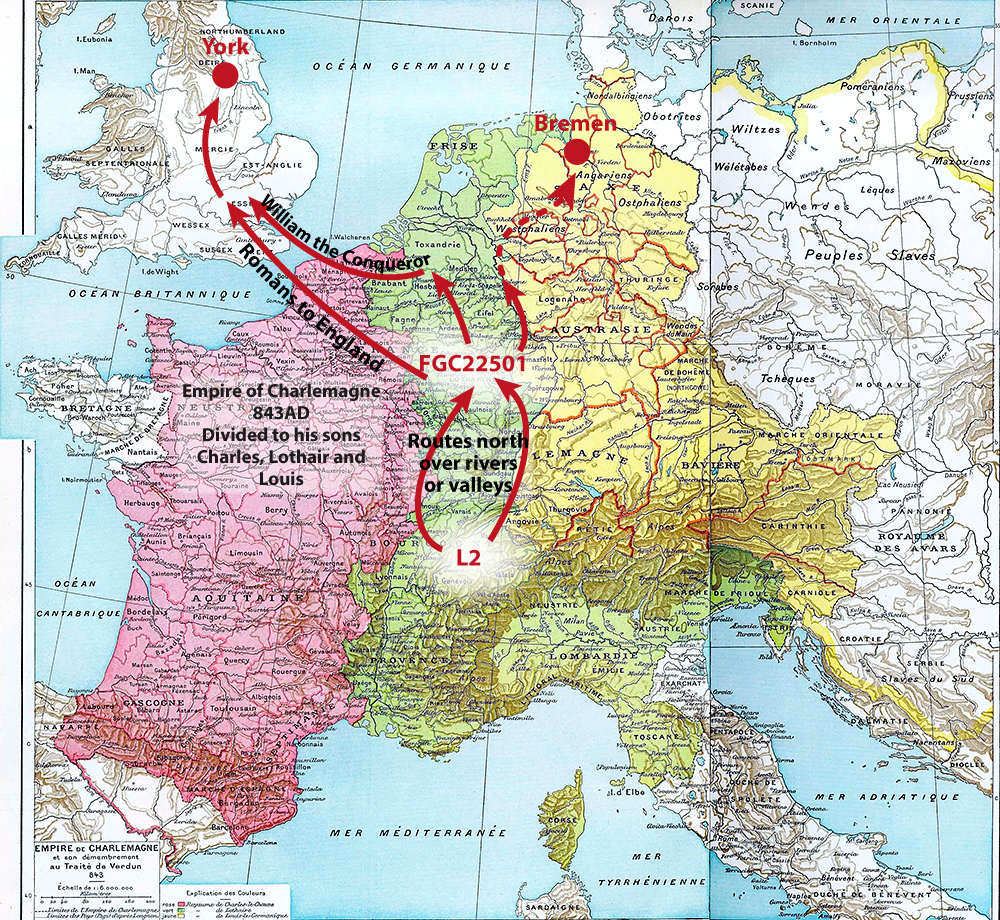 A special thanks to Fredric Veerbeck for his research in to our common ancestry.